Irene Burke, a longtime Marshfield resident, volunteer and knitter of dolls for sick children, turns 100 on Aug. 31, 2020 at Bay Path Nursing Home in Duxbury. Two dozen family members gathered outside the home to celebrate her life on Saturday.

DUXBURY -- Irene Burke always prized resourcefulness throughout her hard-working life and it wasn’t until eight months ago at age 99 that she moved from her home in Marshfield to a skilled nursing home in Duxbury. Her many grandchildren and great-grandchildren are attentive to her at Bay Path at Duxbury and that is where she celebrated her upcoming 100th birthday to colorful acclaim on Saturday.

Four generations gathered outside the nursing facility as Burke, wearing a mask, was brought out in a wheelchair to sit and see all the signs, balloons and cards they had made. After a drive-by car parade with a Duxbury police and fire escort, about two dozen family members stood under umbrellas 30 feet away to call out greetings and sing “Happy Birthday.” There was also a birthday cake enjoyed by Burke inside the residence.

Asked what brought her to the centenarian mark, Burke replied, “Take one day at a time and be grateful and read a lot, to keep your mind healthy.” Later she added, “It took me 100 years to get here and I like it.”

Burke, born in Manchester, N.H., raised her five children in Waltham. She moved to Marshfield at age 65 and became a regular volunteer at the senior center where she was known for her independence and her knitting. She made hundreds of knit dolls for children who were sick or in Third World countries.

Asked what she is most proud of in her life, she said, “being frugal.”

Her granddaughter, Cheryle Gallagher of Marshfield, a speech therapist, brought photo albums, daily journals and other scrap books Burke had kept over the years. The contents bore witness to her sense of order, love of detail and optimistic spirit, including a “Good Neighbor Recipe.”

Gallagher had prepared some fun facts about her “Gram’s” life and personality: Burke is an avid reader and always favored lots of romance novels, she was physically very flexible and could bounce right up from lying down, she was always prepared for the next step or move, knew what the weather had been on a certain holiday in previous years, was “so stubborn and independent,” knew politics, hates waste and is super resourceful, and “if you help her she had to help you back.”

Gallagher also pointed out some habits her grandmother has that might have contributed to her still sharp mind: she does crossword puzzles, likes Wheel of Fortune, kept a daily journal of conversations , remembers the names and birthdays of all of her grandchildren and great grandchildren, kept organized photo albums with photos she took, and did her own housework, landscaping and meals.

Interviewed at her home in 2016, Burke proudly noted that she still shoveled snow and washed the windows. “As long as you have two hands and feet, you keep moving,” she said. “That’s my motto. If my hands aren’t moving, my feet are.”

At age 96, she still rose at 5:30 a.m. to make bread pudding and freeze blueberries. She had given up driving and used the senior center bus transportation five days a week. “It gets me out of the house, and I like to think I am helping people,” she said.

For more than seven years, she knitted and stuffed small dolls for children who have cancer and other illnesses. Donna Weinberg, the council’s volunteer coordinator, recalled that Burke knitted 332 dolls in one year. She had started in 2009 after seeing a film about African children who needed blankets and dolls. Each week she brought a dozen dolls to the senior center and they would be sent to various medical groups.

She moved to Marshfield to be near her son James Burke, his wife Sara, and many of her grandchildren. She enjoyed her home, her family and daily walks on the beach.

After she graduated from Billerica High School in 1939 in a class of 70 people, she married her late husband “Honey” Burke and they had five children: John, Bill, Michael, Beverly and James.

She has 27 grandchildren, 31 great-grandchildren and 2 great-great grandchildren. In family questionnaires, she has been described by different relatives as as smart, frugal, independent, strong, nimble, appreciative and generous.

One of her life’s highlights was a trip to the world’s fair in 1940 in New York City. She also traveled to Bermuda, Italy, France, Jamaica, Ireland and across the United States.

When she was 57, she trained as a certified nursing assistant and worked at the former Waltham Hospital until she retired.

“I’ve got to keep busy,” she told her family.

Giving to others always motivated her and Saturday, she insisted that all the flowers she received be put at the nurses’ station for everyone to enjoy.

As the party ended, activity director Jeanne Damore said, “This is absolutely the best part of my work. I love connecting families however I can in these trying times. I feel blessed to be able to share this day with her.” 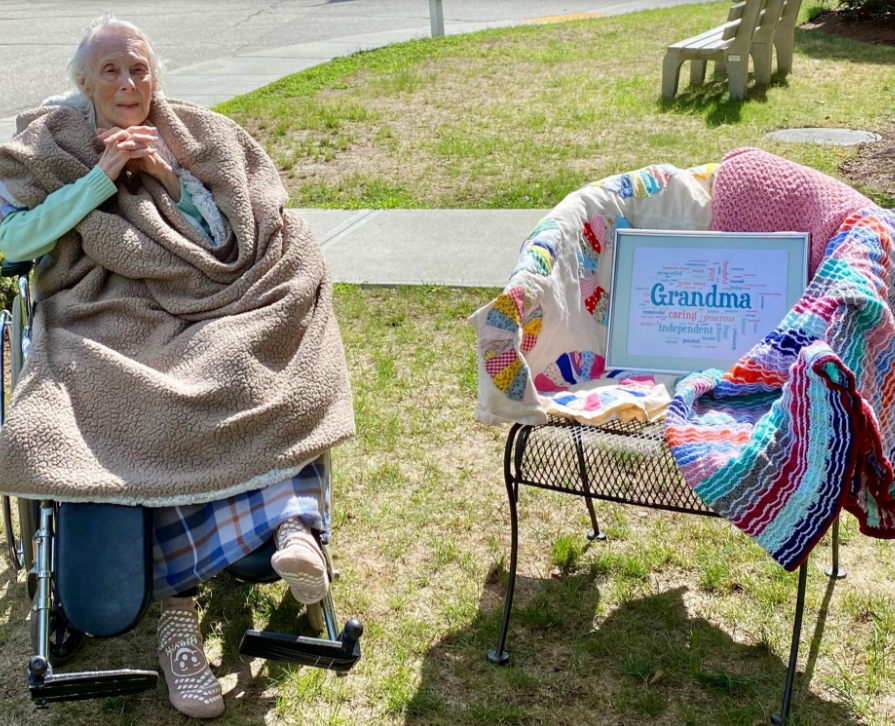