"We come together for you"
Nominated by Kate Garcia

At Sugar Hill Assisted Living Community, there’s a rare combination of energies and talents shared between residents, staff, families, and management. We cherish each other’s joys and successes, helping one another during times of sadness and pain. All this in a fabled “City on a Hill” of remarkable beauty in Dalton.

A recent example of this combination is Robert (Bob) Rood, a 104-year-old gentleman who lived here for three years until his recent passing. Robert first came to Sugar Hill under protest. Family members were leaving for a wedding in California, but he was unable to travel that far and could not be left alone. Howard, his son, booked him into Sugar Hill for a respite break. Robert at first refused to go but agreed at the last minute. Said Howard, “When we came to pick him up two weeks later, he had fallen in love with it and decided to stay.” 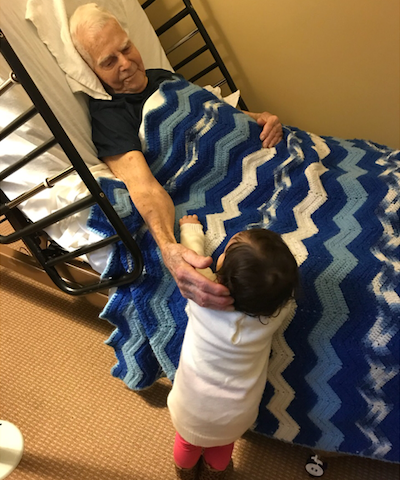 Betsy Blair, Activities Director, explains that there are four components to staying in good health: physical, mental, spiritual, and social. Robert lived according to all four. He worked out at exercise class and chair yoga, loved music, poetry and all things mechanical, went to our church services, and enjoyed monthly birthday parties and entertainment. Additional assets promoting health are nutritious meals created by chefs and nurses and CNAs overseen by our wellness director.

Bob and I both loved old mountain music. At one time, I had family in Virginia where this music was played loudly and often, leading to some serious dance steps.

One afternoon at Sugar Hill, Bob’s daughter-in-law brought tapes and played them full blast. The two of them danced, kicking up their heels to the pulsing beat. I was walking down the hall with two ladies and stopped to listen. The door was ajar and we could see the joy in the dancers’ faces and movements. I turned to my companions and asked if they wanted to hold hands and move around in a circle. One lady was hesitant but soon agreed. The music was inviting and we were dancing in a frenzy, shouting, “Hee Haw,” when the door opened fully. Bob and his daughter-in-law enjoyed watching us, as we had them. I think of this happy moment often and miss this wonderful, kind, and brilliant man. He will never be forgotten. 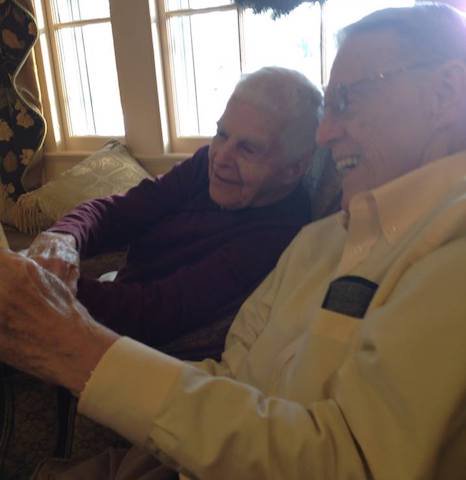 Robert and Rex meet at Sugar Hill, and a forever friendship was formed. (Credit: Kate Garcia)

Kate and Rex’s Story: A Friend for Many Reasons

Whenever Robert came down to lunch or supper, he would pause at the meal board and smile broadly before sitting at his table. Often we could hear his infectious laughter clearly across the room. Up close, he was just as sunny and genuinely interested in whoever he was talking to. Rex and I sat with him at many movies, music, parties, and quiet times.

We enjoyed several meals with him and a family member as well, learning about his remarkable background in technical invention and engineering. I had written a paper on the market for forgings, for a consultant. Once I heard “metallurgy” from Robert, I asked if he would read it. He did and said, “I did not know why I agreed at first but I enjoyed it very much.” Just before his death, he said to his daughter that he wanted to discuss it further with me, but there was no time left.

Our dearest Sugar Hill resident, Robert Rood, was one of our oldest residents, living to be 104-years-old. He was amazing! One thing he did that was appreciated greatly by everyone is that he always remembered our names. This was mind blowing, especially at his age. It was always nice to hear him say, “Good morning, Doreen.”

To me, the most memorable facet of Mr. Rood was his love for music. He absolutely loved it! Every day he would gather his two small speakers, put them on his walker, and go downstairs. One day while I was in my office, I heard very loud music and went to explore from where it was coming. I slightly opened the doors to the large music room and saw him grinning from ear to ear, with his eyes closed, mesmerized by the sounds. He was dancing around the room with his walker and so very happy. My eyes filled with tears at the most beautiful, heartwarming thing I have ever witnessed. Thank you, Robert Rood, for that moment I will never forget. You are missed! 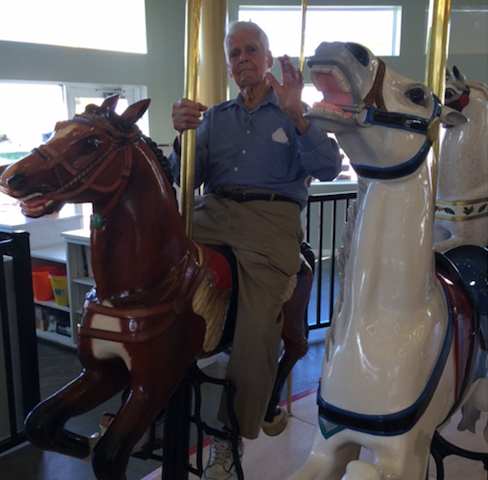 Robert on the the Berkshire Carousel in Pittsfield, a favorite attraction amongst visitors and locals alike. (Credit: Kate Garcia)

As Robert’s condition worsened, it was agreed in a meeting with administrative personnel that HospiceCare of the Berkshires would be asked to care for him. In turn, they provided a hospital-type bed, leaving the original for Howard or family members to sleep in the same room as their father. HospiceCare also answered questions regarding medications and tended to the spiritual needs of Robert and family. Many staff members continued to visit him and assist the family members. A great many pots of coffee were consumed during the vigils.

Upon learning of Robert’s death, many of us residents were very upset. At lunch, the family went table by table comforting us and sharing information.

Howard continues his family tradition of woodworking and teaches a group here most Thursday afternoons. In one recent class, they made small fanciful dinosaurs. They had fun trying to match up their creations to a printed list of formal names.

What do you think of Sugar Hill Assisted Living Community in Dalton, MA?